More than one Grizz game for me this month 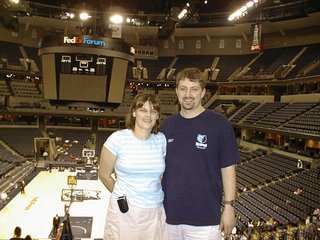 The Grizz have sucked more than I wanted them too this year, so that contributed to me only going to one game a month so far this season, which is probably the fewest games I've even been to for a season by this point in the season. But this month I'm actually going to two games (not counting playoff games, if they go to the playoffs). Here's a pic of me and Geneva from the first game we went to this month.
Posted by Tracy Walters at 2:26 PM No comments: