It's that time of year again...time for the Grizz to stink it up! Waitaminit...I take that back...they usually do pretty good in the regular season...it's the PLAYOFFS where they stink it up! But this year's gonna be different, right? Ha ha! (At least they got rid of Lorenzen Wright this summer, so that'll mean a few extra wins right there. Maybe even one or two in the playoffs!) Here are me and Barbra Wednesday night at the first home preseason game, where they sucked big time. But hey, it's only the preseason, so it doesn't count! But that new PA announcer they got sucks. Maybe he'll get better. 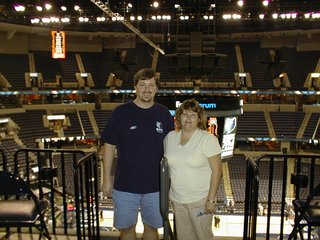 Posted by Tracy Walters at 7:14 PM No comments:

I was at the Mississippi State Fair all last weekend because my parents have a booth there. Well, that Saturday I noticed that just about everyone had on a Superman shirt except for me!! I was jealous!! Luckily I had brought along a Superman shirt of my own to wear, and so I wore it Sunday! I had to show those folks that they weren't the only ones who could be cool!
Posted by Tracy Walters at 7:04 PM No comments: