I order you not to buy so many cars!!

The Osceola City Council tried to pass a stupid resolution last week that said that you could only park four cars on your property, or one car per licensed driver, whichever was greater! It was also going to say that you couldn't even park on your own grass! There were various other stupid things in the resolution. How stupid is that crap, telling someone they can't own as many cars as they want? Mary Milton and Gloria Copeland had a petition going around for people to sign who did not want the resolution to pass, so Mary brought it to my house and I gladly signed it. So when it came time for the vote in the City Council, a lot of people showed up to fight the resolution. So many people, in fact, that the Council didn't even vote on the mattter! It just flat out DIED. Bwahahaha!
Posted by Tracy Walters at 2:48 PM No comments:

Star Wars and the U.S. Post Office have joined forces this year. There are new Star Wars stamps, and mailboxes made up as R2-D2! There was also a cool big Star Wars display at the post offices that featured R2-D2 and C-3PO back in the spring. My good friend Gary Chipman, who works at Osceola's post office, tried to get me Osceola's display, but he said that the post offices had to destroy all of them. I figure he probably just took it home himself! Ha ha! But I told him that some would escape destruction, and sure enough, I saw one on display at the Hollywood Americana museum in Metropolis, IL last month!

Here I am with some R2-D2 mailboxes last month! 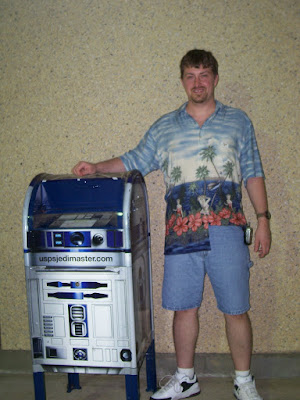 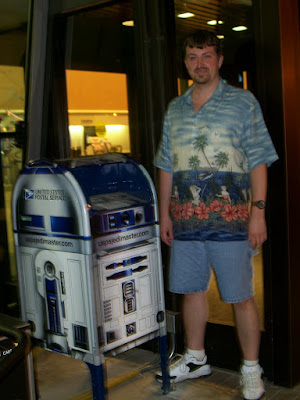 Doing my C-3PO impression, and wearing a Star TREK t-shirt, at Texaco in Jackson, MS: 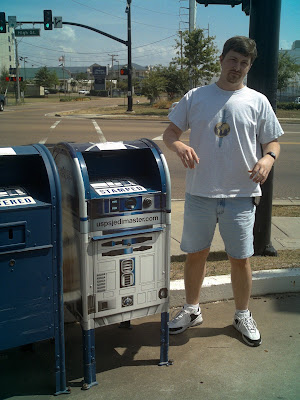 Posted by Tracy Walters at 2:27 PM No comments: