Star Wars In Concert returns in 2016...so we'll be seeing it again!

Just opened up my (Target Exclusive) CD copy of the soundtrack to Star Wars: The Force Awakens and was pleasantly surprised to see the following card inside! 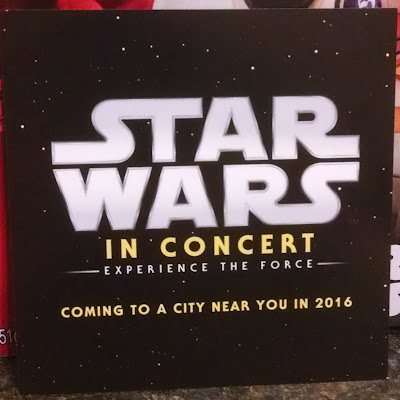 Star Wars In Concert toured around here a few years ago.  It told the story of Episodes I - VI, narrated by Anthony Daniels (C-3PO), while an orchestra played Star Wars music.  There were also props on display from the movies.  When the tour dates were first announced, Memphis wasn't on the list of cities, so +Barbra McLaughlin , +Kaitlin Sexton , and I had to go to Nashville to see it.  The show was on December 13, 2009.

Later on, another leg of cities were announced, and Memphis finally made it on the list.  So this time, +Scott Mcnutt , +Ted Millikan , and I went to the concert.  It was at FedExForum on May 18, 2010.


So it'll be awesome to see the concert again this year.  And +Kariann Sexton didn't go to the other shows, so she'll finally get to see it.  And THIS year, Memphis better be on the FIRST leg of shows!

On a side note, Star Trek is also having their own orchestral concert tour this year called Star Trek: The Ultimate Voyage, celebrating Star Trek's 50th anniversary.  And Memphis is actually one of the first stops on the tour!  It's coming to the Orpheum Theatre on January 29.  Of course, Barbra and I already have our tickets!
Posted by Tracy Walters at 2:04 AM No comments: