Prince on American Idol...could Michael be far behind?

I couldn't believe that Prince was on the American Idol finale tonight! He's such a recluse and so shy (even after decades of being in the public eye). So I'm going to say what I've been thinking for a while now: at some point in the next few years, I predict that Michael Jackson will be on an episode of American Idol. And after seeing tonight's show, I figure that it will probably be at the end of a season finale, like Prince tonight. I've thought for a while now that Michael would eventually be on there, but it won't be anytime soon. It'll probably take a few years, to give the public and Michael himself time to get over his trial. Because after all, American Idol is the #1 show on TV and it's been given the go-ahead for several more years already, so it's going to be around for a long time.

And by the way, I'm glad Taylor won tonight. I wanted Chris to win, but since he was voted off two weeks ago, I've been going for Taylor.
Posted by Tracy Walters at 11:45 PM No comments:

I turned on Entertainment Tonight tonight to see what they were going to say about the American Idol finale airing tonight, and guess what I saw...another story about that anorexic they were showing yesterday! ARRRRRGGH!!!!
Posted by Tracy Walters at 11:28 PM No comments:

Why does Entertainment Tonight always have stories about anorexics? I watch the show every once in a while, and just about every time I turn the TV over there, they have a story about some woman that's so damn skinny that you can see her internal organs and I can't even watch the show cause it makes me sick to my stomach!! There's a story on there TONIGHT about some anorexic! Gross!

UPDATE 7:33 PM
Thought I'd include a picture of the anorexic on tonight's show in case yall thought I was exaggerating or something! 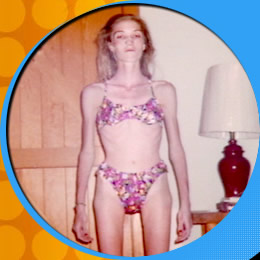 Posted by Tracy Walters at 6:55 PM No comments:

I was looking for the petition to get the Aquaman show on the air yesterday and I found it! Here it is! I'm signature #703. And I've also found out that only three new shows made it to The CW this fall, and they were all under development at UPN only. None from The WB (which is where Aquaman was) made it. And the woman who made The CW's fall lineup announcement Thursday was the same woman who was developing those shows at UPN. So maybe that had something to do with it too.
Posted by Tracy Walters at 4:18 PM No comments:

Aquaman may be on his way back!

Now the President of Entertainment for The CW is saying that the Aquaman TV show could become a mid-season replacement. All the people bitching and complaining about Aquaman not being given a chance (like me) and the huge positive response to the trailer may be making the network execs reconsider! Arthur Curry hasn't drowned yet...

P.S. KryptonSite.com has actually seen the pilot in its entirety and says that it kicks total ass! Go there are read the review!
Posted by Tracy Walters at 2:26 AM No comments:

Aquaman on TV this fall? Not yet...

The CW decided yesterday not to pick up the Aquaman live-action TV series for this fall!! What kind of crap is that? And then this morning I saw where the trailer for the pilot was on a Warner Bros. server for a little while, but was then taken down. There was also a page put up temporarily on The CW's site that had Aquaman listed and said that it would come on Wednesdays at 8pm! So what gives?? It seems like they're testing people to see if there is any interest for the show. Well, based on the huge buzz the show has gotten the past few months, and the way people are reacting to the news that it wasn't picked up, there is a LOT of interest in the show. Anyway, I watched the trailer...and I can't BELIEVE that the network passed on this show. It just made me plum SICK they passed up on it, cause the trailer is friggin' AWESOME! Check it out here and see for yourself! If enough people complain, maybe it could become a mid-season replacment, or better yet, just go to another network. All I wanna know is...where's the petition for the show to be picked up so I can sign it!!
Posted by Tracy Walters at 2:12 PM No comments: