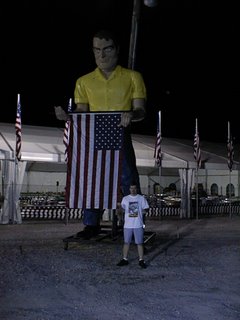 I've seen before on roadsideamerica.com that around the Fourth of July, a fireworks stand in West Memphis next to Interstate 40 will have a big Muffler Man next to it. I think that I had seen the Muffler Man there before, but Saturday night (while returning from seeing Superman Returns for the second time) I spotted him and had my picture taken with him!
Posted by Tracy Walters at 2:24 AM No comments: