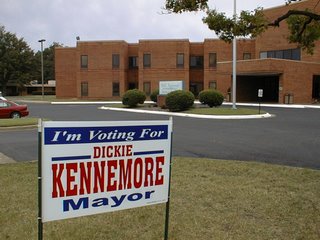 Are political signs allowed on public property? I noticed a sign to re-elect Dickie Kennemore the mayor of Osceola in front of the city hospital last week. I took these pictures yesterday. Does this mean you can put political signs in front of churches, banks, and schools too? I don't know what the law is on this sort of thing, but I thought it looked strange having a political sign in front of a public building. 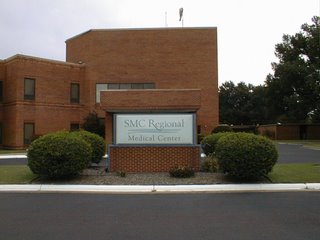 I e-mailed the Jonesboro Sun newspaper about it. Maybe they'll do a story about political signs on public property. I'm not holding my breath waiting on them to do it, but as Vision Man would say, it doesn't matter if you succeed or fail, as long as you try your hardest!

UPDATE 10/29/06: Never heard back from the Jonesboro Sun, so I just e-mailed the Blytheville Courier-News newspaper and the CW and NBC TV stations in Memphis about it. Reckon one of them will think it's a good story?
Posted by Tracy Walters at 6:04 PM No comments: