Kiss and Star Wars In Concert both playing in Missouri RIGHT NOW!!!

Missouri is rocking right this minute!! Tonight, Star Wars In Concert is playing in St. Louis, and Kiss is playing in Kansas City! And they both started at 7:30pm! Of course, Kiss had an opening band, but by now Kiss has taken the stage, so at this very second Kiss and Star Wars are both rocking Missouri at the same time! But I'm not at either one, cause I saw Kiss in Little Rock, and I'll be seeing Star Wars In Concert in Nashville Sunday. But Missouri is the coolest place in the world tonight, buddy!!
Posted by Tracy Walters at 9:28 PM No comments:

Kiss is back, buddy! Last week they started their new North American tour, and next week they'll be releasing their first studio album in eleven years. And here lately I've been hearing Kiss songs on the radio, and a couple of stations are giving away free tickets to the Little Rock show. Speaking of the Little Rock show, that's the one I'm going to, cause Memphis isn't on the first leg of the tour. Will Memphis be announced at a later date? It should be, because the fans voted on where the tour should go, and I think Gene Simmons said the top 60 cities would be on the tour, and Memphis made that cut. Or will Memphis get SHAFTED, like it did with Van Halen (with Sammy Hagar) a few years ago, which I wrote about a few times in my blog back then. I'll tell you what, if Kiss doesn't come to Memphis, I'll blame it squarely on FedExForum, cause for some reason I think that they just don't like for too many big name acts to come their establishment. Why, I don't know. But we'll see!
Posted by Tracy Walters at 10:35 PM No comments:

Just got some more company convenience. I'll be off for a week and half. Now that's what I'm talking about!!
Posted by Tracy Walters at 12:23 PM No comments:

I saw the space station!

Just saw the International Space Station for the first time! It passed directly overhead for five minutes, from 9:40pm to 9:45pm. If you were looking for it, you couldn't miss it; it looked just like a moving star. I've seen parts of it in person before, before they were attached to the rest of the station: the first time on January 1, 2000, at Kennedy Space Center (awesome way to open up the 2000s), and the other time just two months ago, when I visited KSC again (although the parts I saw two months ago haven't been taken to the station yet.)
Posted by Tracy Walters at 10:32 PM No comments:

The Los Angeles Lakers are about to win their next championship. And it's all because of the Memphis Grizzlies.

Y'see, last year, Memphis traded all-star player Pau Gasol to the Lakers for...um...well...nothing. He was traded for like a draft pick or two that Memphis has probably already given away, a player or two that I don't think are with the team anymore (and that Memphis knew weren't going to be with the team for long), and Pau's brother, Marc Gasol. Now, Marc is a good player, but hey, there are a lot of good players in the league. But Pau Gasol is an all-star.

Oh, and there's another thing, too: Jerry West. West has been with the NBA for a hundred years as both a player and an executive. 95 of those years he was with the Lakers...5 of those years he was with the Grizzlies. He left the Grizzlies in 2007 to go back and hang around the Lakers again. The very next year, Memphis traded Pau Gasol to Los Angeles for nothing. West had it planned all along.

As soon as Gasol went to the Lakers last year, I knew that they would come close to winning the championship last year, but that they would defintely win it this year. My only slim hope of LA not winning was if LeBron James and the Cavaliers played them in the Finals. But the Cavs choked just like they always do. And LA is on its way to a sweep of the Finals against...get this...the MAGIC.

So when the Lake Show kisses and slobbers all over that trophy Thursday, and the rapist Kobe Bryant is all smiles (after looking pissed off after every play in the series, even ones that go in his favor...why is he mad when he makes a shot? Is he effed up in the head?), all I've got to say is...you're welcome, Los Angeles Rich Man's Team...we gave it to ya!!
Posted by Tracy Walters at 12:09 AM No comments:

It's the most wonderful time of year again...time for...Company Convenience!! A time where I'm off work and can do whatever I want to do, all day every day, and get paid for it! Now that's what I'm talkin' 'bout...
Posted by Tracy Walters at 4:50 PM No comments:

I sent the picture of me and Peter Mayhew (aka Chewbacca) that I had taken at Star Wars Celebration II to Star Wars Insider magazine. They have a section called Bounty Hunters that contains pictures of people that had their pictures taken with Star Wars celebrities. Maybe they'll publish my pic in the magazine and I'll be famous again, like I was a couple months ago when I walked onto the background of the Grizzlies' live pre-game show on TV! 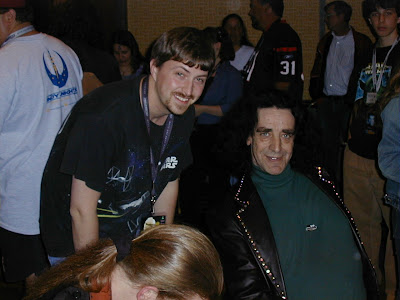 Posted by Tracy Walters at 3:24 PM No comments:

Barbra and I to be on The Amazing Race!!!

We made it! Barbra and I have been applying for years to be on The Amazing Race, and finally we’re going to be on there! We just got the call today. At first, Barbra didn’t really want to do it, since she doesn’t like to fly, and we’d have to fly to all the different locations via airplane. But when I reminded her that we’d be playing for a million dollars, she said “Where’s the jet?” For more about this awesome news, click here!
Posted by Tracy Walters at 5:22 PM No comments:

The Memphis Tigers got eliminated from the NCAA tournament last night, making it only to the Sweet Sixteen. They had probably their only chance of going all the way last year, when they made it to the championship game and were up by 9 points with 2:12 left in the game. But then they missed like a gazillion free throws. And they sucked at free throws that whole year. (I'm sure they did this year too, but I didn't pay much attention.) So how are you going to win a championship when your whole team sucks at free throws? Answer: you don't.
Posted by Tracy Walters at 4:25 PM No comments:

It was announced yesterday that the Green Lantern movie will be released December 17, 2010. All I've got to say is...thank the Lord! Been waiting on GL at the movies for years!! Bring it on!
Posted by Tracy Walters at 3:42 PM No comments:

The Dark Knight doesn't get Best Picture nomination; further proof that the Oscars are a joke

The Academy Awards nominations were today, and The Dark Knight didn't get a nomination for Best Picture. If it had, it would've been the first comic book movie ever to do so. It did get eight nominations, including Best Supporting Actor for Heath Ledger (which was guaranteed because of the sympathy vote), but not the nomination for Best Picture. Why didn't it? Because the Oscars have been and always will be a joke, nominating movies for awards that people have never even friggin' heard of.

The Oscars are run by a bunch of old Hollywood weirdos who wouldn't know a good movie if it bit them on the ass. They have always avoided comic book, science fiction, and fantasy movies. Believe it or not, Star Wars in 1977 was actually nominated for Best Picture, but it lost to some movie that no one had ever heard of. The last Lord of the Rings movie won Best Picture a few years ago, and it is the only time a fantasy movie has ever won, but there was a specific reason why it won. You see, the Lord of the Rings movies started off as novels in the 1950s, so that gives them "clout" with ceratin idiot people who otherwise wouldn't give clout to a fantasy movie that started out as a movie. (Of course, those movies would have been great if they had had an hour cut out of each one. Oh, and what's so funny is that the LOTR movie that won Best Pic is the only one of the three I haven't seen...I've seen the first two, but they were both so long and drawn out that I haven't been in a rush to see the last one. But other than that, they were pretty goo. So I'll see the last one one of these years.)

Anyway, to get back to the subject at hand, and in closing, I would like to say...the Oscars suck.
Posted by Tracy Walters at 8:56 PM No comments:

My favorite from two years ago wins Rock of Love: Charm School